As some of you may know, my family and I have been going through quite challenging times during the past two and a half years. So much so that even in the past weeks the question we have been asking is whatever will happen next? But I am not here to say woe is me but to celebrate what God has done for me.

I am going to be very honest, please stay with me here, and admit that in that time I have got impatient, frustrated, angry and absolutely despairing of God and the church. I have sat where you are and been desperate for words or songs of encouragement but found none. I have been told to pray out loud or leave my troubles at the door and focus on God – when your daughter is back in hospital for the – well I have lost count of the number of times, your brother has recently died or you are being sent to hospital for an “urgent appointment “because “something” was found on a CT scan, it’s hard to do these things. It seems almost impossible to “move on with God” in these times – but that’s what has happened to me.

Strangely it’s all about surrendering to God I have found – I really don’ t like that word as it suggests that you have lost, been defeated and now have to submit and that’s not how I want to see God at all. Those of you who know me, know that I question many aspects of Christian life and belief and more to the point, if I am told to do something – I do the opposite. During the past few years I have got better (or worse!) at this even though I have been a Christian for over 25 years. But recently I have had no fire or thirst for God or any of those other Christian clichés that we often sing about – I felt I was holding on to God by my fingertips.

In the worst of times I would cry out and talk to Him. He had answered my prayers right at the beginning of this awful time – but it didn’t seem like He was around after that. So many times I prayed but I didn’t seem to hear an answer and wanted to forget God and just carry on myself.  It would be easier but I couldn’t let go and thank goodness God didn’t.

But looking back now I can see that God sent friends to keep me going and strengthen me – a much better way than telling me what to do – how well He knows me!

Anyway back to the surrendering! I haven’t found a better word yet but I’m still searching. How I surrendered was – “God I can’t do this anymore – I need you now!” I felt bad, getting angry with God – but I did. People have shown me since – that it’s ok.

I started to find that I was talking to God more – but I wasn’t yet really listening-but at this time it was ok. Then I started to see Him at work around me – I have to be honest that I thought, if my daughter has such a strong faith after all she has been through and to be honest is still going through– there must be something worth holding on for. I can only say it’s like the lyrics in a beautiful Matt Redman song called – Your Grace finds me – that was exactly what happened. The song tells that in every life situation God finds us and that His grace is for everyone however imperfect we are – how wonderful is that!?

Then I stopped worrying about the way it appeared faith should be done and concentrated on my relationship with God. I didn’t worry too much about reading my bible and praying every day but just focused on reaching out and talking to God at times when I needed Him. I am really sorry to admit this but I stopped worrying about not agreeing with things that were said from the front in church but worked on my relationship with God just as I would with other people.

I talked to Him more and rested in Him – it was all I could do – but it was enough. Then I began to almost feel Him carrying me through the worst of times and I started to listen to Him! I was even given two bible verses which have sustained me lately – this never happens to me, they must have been given to me by God as I can’t say that I ever read Deuteronomy so I wouldn’t have come across them – they are Deuteronomy Chapter 33 verses 26 & 27 –

“There is no one like the God of Israel. He rides across the heavens to help you, across the skies in splendour and majesty. The eternal God is your refuge, and his everlasting arms are under you.”

I still don’t feel I have “the fire” or “thirst for God” in the way I used to – it seems to now go much deeper. I am so grateful for all the friends and acquaintances who have kept me going over the past few years – they kept me holding on as I would often come to church to see them. Through them it was clear that God didn’t let go – His grace had found me when I needed Him and in the way He knew He could help me the most.

Who says you can’t have fun at a Home Group?

What better than a meet up with friends from our Home Group, and you can’t beat a good curry! 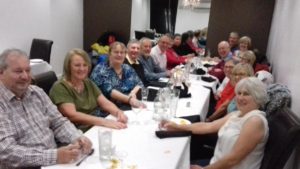 And earlier in the year……..

Celebrating Birthdays at our Home Group 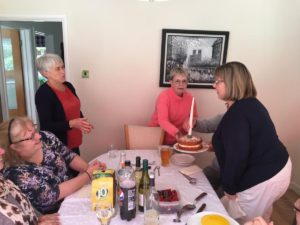 A cake for Carolyn

Barbecue followed by cake and other treats.

Just what the doctor ordered and a great way to spend the afternoon following the Steps to Christ in the morning.

All in all a perfect day.

Update from Mark and Arleen

It is a quiet Sunday evening so it seems a good time to let you know how things are going here in Moldova. We have been here for four weeks now and getting to know the town of Cahul quite well. The weather has mostly been good since we arrived so we have been out as much as possible to explore and to enjoy becoming more familiar with everything. 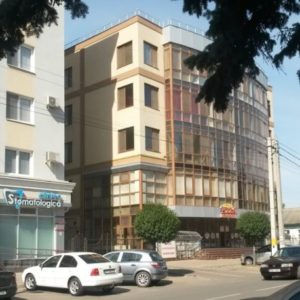 We started teaching three weeks ago. It all seems to be going OK and we have met some lovely young people, all very respectful and mostly keen to learn. Ages range from about 13years to adults – including an accountant, teacher, car mechanic, council officer, bank worker and a full time Mum. We have been for lunch with several of the other teachers to get to know them better as well, two from the USA and some Moldovans who will help us with conversational Romanian. The English lessons are held in the building of the Baptist Church that we are linked with. Lessons are held after school hours, so from 2.30pm and can go on until about 8pm. Conversations in the class on different topics does give the opportunity to share our faith- please pray for this.

It’s great to meet folk at church on Sunday morning and they have been very welcoming. There are a few English speakers but communication is a bit limited still! One of the more advanced students from the English lessons translates for us and does brilliantly. As well as the church services Arleen is now part of a small ladies’ prayer group and has even been hospital visiting with the pastor’s wife. She and the pastor, Anatole, are a great encouragement and seem to have time and energy for many needs.
We are staying in a shared flat belonging to the church in the block shown here and it is about five minutes’ walk from the main shops and fifteen from the church where we are teaching. It is wonderful to be car free as, so far, we have all that we need within 15/20 minutes’ walk.

As well as a couple of new supermarkets and a range of shops there is a great market nearby; loads of fresh fruit and veg at the moment. The right time of year I suppose

. We even made some plum jam this week as the plums are so plentiful and only about 25p per pound.

We are one block away from what seems to be the only real park in the town, but a great place to sit, people watch and eat an ice cream on a warm evening.

At the moment we are here on a ninety-day tourist stay but in the next month or so we will need to visit the capital, Chisinau, probably three times in order to get a visa for our stay here. This will involve a three-hour bus journey each way and possibly a stay overnight with visits to various offices. Please pray that this will go smoothly and that the various pieces of paperwork that we have been told that we need will be in order. 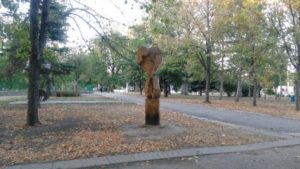 Appointment of New Vicar for Gleneagles

Who says you can’t have fun at a Home Group? Home Group Curry Night What better than a meet up with friends from our Home Group, and you can't beat a good curry! And earlier in the year........ Celebrating Birthdays at our Home Group   Barbecue followed by cake and other treats. Just what the doctor ordered and a great way to spend the afternoon followingMore

WELLINGBOROUGH STREET PASTORS Established in 2013 Work alongside the Police, Pubs and Clubs, the Council and the local Pubwatch Help, Care & Listen to those in need and Serve the Night Time Economy Currently 15 Commissioned Street Pastors, with three trainees about to be commissioned and seven more in training. One of our Street Pastors is a trained Response Pastor Go out a minimumMore