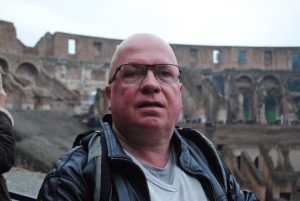 I was born into an Irish Catholic family who lived in West London. Actually, more accurately I was born to a young unmarried girl in Ireland who (I guess) was forced to give me up. The first official record of me is my baptism on the day after I was born in the church of one of the mother and baby homes run by nuns. If you have seen the film Philomena you will know the place.

Anyway, I was adopted by the age of six months (or as my mum and dad later told me, I was chosen from all of the babies and children there.) Bizarrely, I have a memory of a large room in an old house full of babies and toddlers.

I was brought up as a Catholic in the days when you were told exactly what to believe and how to believe it and how to worship God. The latest new-fangled thing as I was growing up was that the mass was now being said in English and not Latin. The God I was taught about was a fierce-some God who saw and knew everything that you did. Whatever you did was not good enough. We had original sin from Adam and Eve, and despite baptism washing it away, we know that we were evil. We would go to purgatory when we died, which seemed to me to be a half-way house between Heaven and Hell. There was suffering – you needed to suffer after you died for your sins before you went up Heaven. You could be in purgatory for many years.

My education was in Catholic schools, taught by nuns in primary school, priests in secondary school and lay people in sixth form.

Anyway, being me, an inquisitive person, as a young teenager I read tremendously, as well as taking things apart to see how they worked, and not getting them back together quite the same afterwards. My reading was insatiable. I read encyclopedias. I read about other religions. I needed to understand everything.

As luck would have it, at the church that I went to, three young curates arrived as part of their training. These were normal people. They played football, liked modern music and two of them became involved with the Church young people.

I became involved in the church music group, playing guitar and from this I went away for youth weekends in Buckden, which were led by one of the curates, now ordained. Through this I met an amazing group of charismatic Christians, my age and slightly older. This was a type of church that I had never seen before. Young, enthusiastic to do things to share their faith in a different way to the way we had been brought up. Together we were active in protesting against the world as it was – nuclear weapons, poverty etc.

With this group, I went on to work with many what we would now call “youth initiatives” introducing people to the world around them and to this loving God that I now knew. He wasn’t the scary one I was brought up with, who insisted that worshipping Him meant saying the right prayers at the right time in the right place, but One who wanted me to do things for people.

I went to university and was involved in a similar group in Liverpool run by the chaplain there. My inquisitive and questioning nature was reinforced by my study of History, as we were expected to question everything and not accept what we were presented with.

After this, the world of work and involvement for a couple of years in a group that took sixth formers to Lourdes in France to work around the Handicapped Children’s Pilgrimage Trust annual pilgrimage there at Easter to just be there to help the children and their helpers over the weekend. What I was privileged to see there was amazing. Children with conditions that most adults would struggle with, who were full of love and joy, and faith that God was in that place.

I became more immersed in work, and less involved in Churchy things although I always prayed.

Time went on and I met Julie, and we had the boys. We both wanted them to be baptised and know the God that we knew so we started going to our local Church. This was a “high” Anglican Church – bells and smells.  The people there welcomed us and we felt that this was our Christian family

The boys were becoming young men, and I was involved in running a business that had various pressures. Despite being fortunate to have a wonderful family life, I felt that the pressures of the company were all on me. Twenty odd employees each with a family that depended on this company and which I felt compelled to ensure survived the various changes that it had to face. I prayed and God helped but my big prayer to be guided and to be given strength enough to sort everything was never answered, Just before Christmas 2014 I had a breakdown. I couldn’t push myself anymore and my mind gave up to protect itself from me.

I was in a dark place. Julie and the boys did everything for me but nothing seemed to help. I prayed but all around me was dark. I knew God was there, but He and everyone felt outside the darkness that surrounded me

I struggled on, and after a few months saw a doctor who prescribed medication which after finding the correct dose helped to take much of the darkness away.

Unfortunately, the situation at work did not change and I remained involved in things that caused me problems, and continued to struggle. Still I prayed, but the big prayer to be guided and to be given strength enough to sort everything still was not answered.

Julie & I had started looking for another church to go to around this time and for whatever reason we arrived in late 2015 at Gleneagles, for the confirmation service. We were made very welcome, and despite the style of worship being a bit different what we had experienced most recently, we felt we fitted in, and we stayed.

For all of us, Julie, Sam, Sean and I, being at Gleneagles has transformed our Christian lives. We are all involved in groups in some shape or form within the Church. Julie works with the Daylight Centre, and I have started with the Street Pastors and working as treasurer for a local charity.

My darkness is still around, but less so now. The big thing for me is that I have been brought to a position where I realise that I can’t be given the strength enough to sort everything at work. It isn’t up to me. I can do things with God’s help, and will only be able to actually get things done if he wants me to. However, much I ask, if it is not given it is not for me to do at this time.

My faith has deepened since we joined Gleneagles. The church family is immensely supportive of each other, and to my mind has helped my spiritual growth, and together with my family, has given me the strength to be myself again, and to give to others in the way I had in the past.

In Person Services                 We have weekly In Person services at Redwell Primary School  starting at 10.30 am on Sunday mornings. There are separate groups for under 18's - see one of the following for further details:- Children Youth The services are live-streamed to YouTube and added to Facebook later in the day. They can be accessed by clicking on the following links orMore

FUTURE PLANS - MESSAGE FROM THE VICAR

FUTURE PLANS - MESSAGE FROM THE VICAR Dawn Airey - The Vicar All Saints Church, Great Harrowden In late 2020 I felt the Lord speak to me through Paul's storm journey in Acts 27.  Paul was imprisoned on a boat when a terrifying storm threatened to destroy the boat and everyone on it.  In the middle of the sea, with no land inMore

Happy Easter!   This year 190 rocks were painted and distributed throughout the community. For every rock that was found and brought Church in Redwell School on Good Friday, an Easter Egg was substituted for it. As last year, the Ester Rock Hunt was a great success. Thank you to all who painted the rocks and supplied the Easter Eggs, and congratulations to allMore

Established in 2013 Work alongside the Police, Pubs and Clubs, the Council and the local Pubwatch Help, Care & Listen to those in need and Serve the Night Time Economy Currently 15 Commissioned Street Pastors, with three trainees about to be commissioned and seven more in training. One of our Street Pastors is a trained Response Pastor Go out a minimum of threeMore