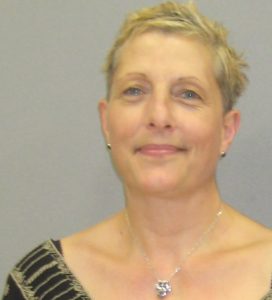 My childhood for me did not hold many happy memories. There were some good times, but Mum and Dad didn’t get along and that in itself caused me a lot of anxiety. There were a lot of rows and Mum drank a lot. Mum worked hard in bars and clubs but would often come home drunk. I remember often laying awake waiting for the key to go in the door. I would know by how it went in as to what state she would be in. On quite a few occasions when she came home I would run out of the house in the middle of the night, knock on a neighbour’s door and stay there for the rest of the night.

My brother is a lot older than me; he was away in the navy. Someone had given him a little blue bible. I found it on his bookshelf. It fascinated me. It had lovely coloured pictures but the writing was so small you could hardly read it. I was about 7 or 8 at the time but was so drawn to this bible. Nobody in my family believed in God, but I was so comforted by this little bible I started talking to the man in the pictures. (Who I later found out was Jesus) and asked him to help me and not let my mum come home drunk. She still did, but I never felt alone again. I knew I was praying to Jesus and did it every night. Once I asked him to come into my heart. Immediately, I felt a feeling I’d never experienced before. I felt a warm fuzzy feeling and  like I was flying It’s so hard to describe because it was so lovely.

At my first senior school I was bullied and moved to another school. I met a girl called Debbie and we became good friends. She was a Christian and took me to her church. This was the first church I’d ever been involved with. Amazingly there were people just like me who believed in Jesus.

Like many teenagers I rebelled and drifted off the right path. I got pregnant at 16 and devastatingly baby Ian died at four months from cot death. I always continued to pray but I blamed myself and sometimes still do, but Jesus got me through and kept me strong. My mum and dad had separated and I lived with my dad he died 7 months after Ian. Although it was a difficult time for me I always felt Jesus was with me and I was never on my own. Eventually years later I met John who was a Christian.  I know that Jesus brought us together.  My whole life turned around Jesus was everything to both of us. We had twin boys which was such a blessing. Although I was so happy, I still felt I wasn’t good enough for Jesus. I felt that all my life I kept letting him down as I still carried lots of issues.  For example when I was in church people would speak out in prayer and I thought Jesus never talks to me like that. He never tells me to do anything. I kept thinking I’m not good enough for him. He never gives me guidance as to what I should be doing.

Anyway, long story short! I went on a prayer walk that Ali had organised. I’d never been on one before. Melvyn (bless him) got paired up with John and I. We were supposed to be praying for people in the neighbourhood: We did say a few prayers but I just kept talking to Melvyn about my insecurities. I went on and on. Poor Melvyn.

He came to see me a couple of weeks later with Alex. I opened up my heart to them, and through all of their prayers and talking to me all of the burdens i’d been carrying around all of these years lifted off of me. I was able to forgive people who’d let me down over the years. I’d never forgiven my mum and I forgave her. A huge weight lifted off of me.

I knew that Jesus spoke through Melvyn to me in church a week later when he mentioned the Daylight Centre. I contacted them that week and have been volunteering there ever since I knew that was what Jesus wanted me to do.

I always knew that Jesus really loves me but I used to feel that I let him down all of the time. Despite this he never abandoned me. I love Jesus so much words are not enough to say what I feel about him.

Thank you Jesus you’ve helped me so much through Melvyn and Alex. Although for some reason I can’t think why but Melvyn wasn’t at the next prayer walk.

Established in 2013 Work alongside the Police, Pubs and Clubs, the Council and the local Pubwatch Help, Care & Listen to those in need and Serve the Night Time Economy Currently 15 Commissioned Street Pastors, with three trainees about to be commissioned and seven more in training. One of our Street Pastors is a trained Response Pastor Go out a minimum of threeMore

In Person Services                 We have weekly In Person services at Redwell Primary School  starting at 10.30 am on Sunday mornings. There are separate groups for under 18's - see one of the following for further details:- Children Youth The services are live-streamed to YouTube and added to Facebook later in the day. They can be accessed by clicking on the following links orMore

Happy Easter!   This year 190 rocks were painted and distributed throughout the community. For every rock that was found and brought Church in Redwell School on Good Friday, an Easter Egg was substituted for it. As last year, the Ester Rock Hunt was a great success. Thank you to all who painted the rocks and supplied the Easter Eggs, and congratulations to allMore

FUTURE PLANS - MESSAGE FROM THE VICAR

FUTURE PLANS - MESSAGE FROM THE VICAR Dawn Airey - The Vicar All Saints Church, Great Harrowden In late 2020 I felt the Lord speak to me through Paul's storm journey in Acts 27.  Paul was imprisoned on a boat when a terrifying storm threatened to destroy the boat and everyone on it.  In the middle of the sea, with no land inMore